Driving ahead with the help of OKI’s Managed Print Services 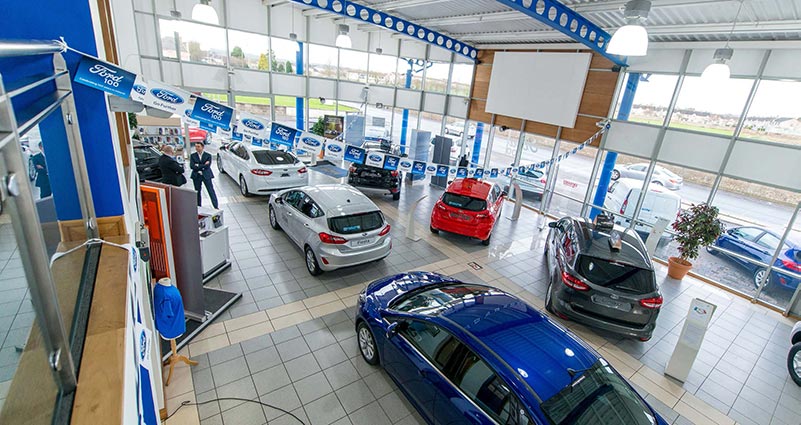 Michael Lyng founded the business in 1996 and continues to drive
this 100% family-owned business forward. With a continuous focus on growth, the company secured the Mitsubishi and Hyundai franchises and more recently has become the main dealers for Ford in Kilkenny. It now has three locations – two in Kilkenny one in Carlow – offering sales and servicing and all backup services for cars, vans and 4x4s. They are now one of the best run motor dealerships in the country with a relentless focus on providing top quality and excellent service at a competitive price.

The company had 15 printers spread across the 3 locations. Within those locations the printers were located in disparate places – including reception and the workshops. What had been happening was that equipment such as toners for printers would only be ordered when it ran out. So time was being spent by staff manually ordering toners on an ad-hoc basis. With shortages not being anticipated or planned for, the result was periods of time during which the printers were unusable. Printer downtime seemed unavoidable.

When replacement toners and cartridges eventually arrived, they were not labelled with the name of any particular person or any particular printer. This resulted in the newly-arrived equipment often being shelved or taken by the wrong person for a new or anticipated need of their own. This was also being compounded by the misappropriated cartridges or toners sometimes being incompatible for the printers they were being used for. The company was dealing with two challenges – the high printing costs and the hampered productivity – both visible to the company’s IT provider Business IT Solutions (BITS).

BITS proposed to Padraig McCluskey, General Manager, that Michael Lyng Motors use OKI’s Managed Print Services. BITS laid out compellingly the productivity improvements and cost savings that were possible and Lyng Motors agreed to the proposal.

Michael Lyng Motors are now reaping the benefits of OKI’s Managed Print Services in three different ways: productivity, costs and maintenance. Productivity: Now, when a printer’s amount of toner goes below 30% of its capacity, an order for a replacement is generated automatically without an iota of human intervention. That 30% has been carefully calculated to ensure that the replacement typically arrives onsite before the toner is exhausted. OKI have also provided buffer stock; this provides extra assurance that printers can remain useable while orders are being processed.

“We have lowered our printing costs, improved our productivity, and virtually eliminated printer downtime. Our only regret is that we did not start using OKI’s Managed Print Services earlier. We look forward to a long-term relationship with them as we continue to grow our business.”

Next Entries »
Get an Estimate For Your IT Requirements