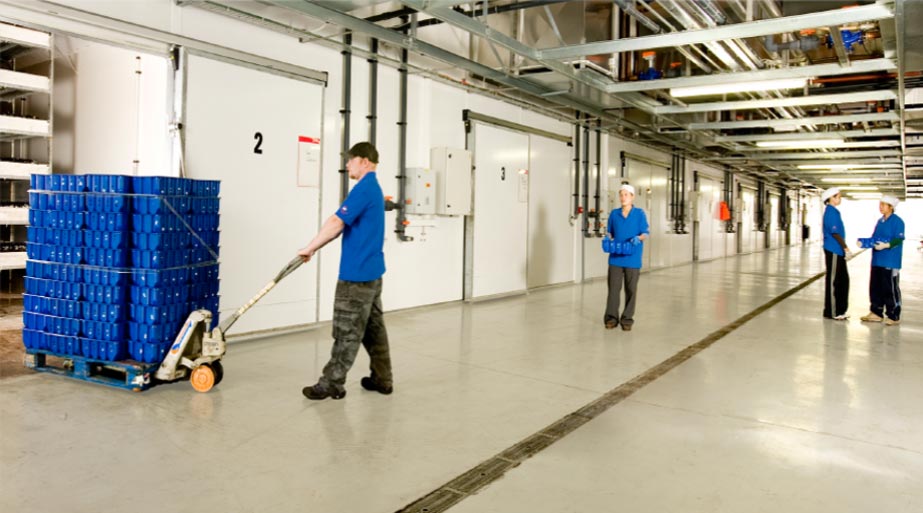 Codd Mushrooms have been growing the finest quality mushrooms from their farm in Tullow, Co. Carlow since 1989.

Starting from a small shed with two employees, they have grown into a modern, purpose-built mushroom production and packing facility, employing 250 people, and are still growing. They are now the largest supplier of mushrooms into the Irish Market – packing more than half of all mushrooms sold in Ireland – and supply all of the major retailers and the food service sector.

As this growth continues, they are striving for their Tullow operation to be one of the most innovative and environmentally friendly mushroom production facilities in Europe.

This growth has naturally brought with it challenges – one of which is that the company’s IT infrastructure had come under strain. The company was at risk of outgrowing the network’s capabilities – a network that had been designed for a smaller operation, conceived during the early stages of production in Carlow. The network had become a limiting factor.

BITS carried out an in-depth analysis of the network requirements needed for the company both now and for the future. The need identified was for a new network solution that was future-proofed – providing a more robust infrastructure for current needs and an ability to cater for future growth.

Codd Mushrooms are now in production 24/7 and the old network could not support that.

BITS proposed a completely new network that would be more stable and which would also support 24/7/365 production. The BITS solution would also allow the new network to be rolled out without production being affected and ensure that there was redundancy in terms of the network equipment in use, i.e., in the event of a device going off-line there was a failover device in line that would allow for seamless switching to maintain uptime for production.

BITS worked with internet service providers to get dedicated broadband services to the site and, once the designed network was agreed, the solution was implemented. This involved a complete move of the network’s centralised communications room to a new location and the re-routing of network infrastructure to this new, central location – all the while ensuring little to no production downtime.

During this transition from the old to the new there were effectively 2 networks running simultaneously while all primary services were progressively migrated over to the new network.

Each of the (many) growing rooms within the facility require the use of a tablet to allow the mushroom-pickers to input data. To facilitate this, a comprehensive wireless network solution was implemented. This solution, using Ubiquiti hardware, is geared for a demanding outdoor environment where there are extremes of heat and moisture. 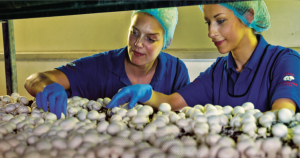 Finally, the changes being implemented at this time, particularly the dedicated internet services, allowed for the implementation of two valued additional features—firstly a Hosted Email solution (using Microsoft Office 365) and, secondly, a Voice over IP or VoIP phone solution in a hybrid configuration. In this hybrid configuration the VoIP solution was integrated into a traditional telephone system. This now facilitates both internet and traditional voice services.

“We wanted Wi-Fi everywhere if we could have it, but there was a limit to what we could spend too. We needed a partner who could strike a healthy balance between giving us as close to full coverage as possible within a budget. BITS delivered on that.”

Ryevale were able to supply detailed drawings of the building and also had the bonus of a site electrician with valuable insights into the structured cabling options. With this support, BITS came up with a plan that gave Ryevale exactly what they wanted.
BITS marked the drawings of the building with the exact appropriate spots for maximum coverage, the cables were laid by the site electrician, and the BITS engineers did the rest.

As part of the project, BITS upgraded the backbone of the network. The existing hardware was of good quality but unfortunately it was very dated. BITS took the opportunity of the Wi-Fi upgrade to replace the switches on the network with high speed, PoE devices, thereby speeding up the LAN as well as broadening the Wi-Fi coverage. This also removed the need for power outlets to each access point. In a nursing home, the aesthetics of the environment is important, and the more attractive access points, coupled with no visible cabling, meant the system blended well with the décor. No more unsightly antennae or plugs.

In addition, as part of this aspect of the project, BITS upgraded the router, enabling a split on the network, so the admin and staff side of the business could rest assured that residents and their guests had no access to the business side. In an environment where data is sensitive and potentially valuable to cyber-criminals, the security and protection of that data is paramount.
This hardware upgrade used competitively priced Ubiquity hardware throughout – providing professional grade networking performance at prices businesses can afford.

BITS developed and implemented a project plan that took all requirements into consideration and delivered on time and within budget. Using Ubiquity hardware for the Wi-Fi network, BITS were able to create a split in the network, with advanced firewall settings, securing access between the residents and the staff and all at a very competitive price.

“Planning and management with the BITS team was a simple and organised process. Engineers on site for installation were very friendly and co-operative and got the job done effectively with no disruptions in a timely manner.

After care support was exceptional, members of the BITS team were on hand at the end of a phone call or email with a prompt response resolving any queries. I would highly recommend BITS to any business looking for an upgrade or addition to their Network Infrastructure.”

Driving ahead with the help of OKI’s Managed Print Services